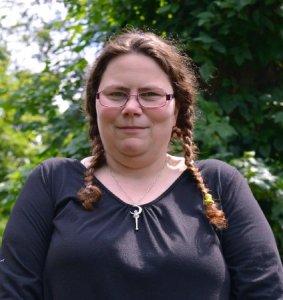 Angela is a recent graduate of Ohio University-Lancaster where she received two degrees.  She earned an Associates in Electronic Media in 2005 and a Bachelors in Technical and Applied Studies in 2010.  While attended school at Ohio University, she worked as a computer lab assistant and as an operator for the distance learning program.

While completing her education, Angela, worked on several projects and interned for a quarter at Varga Communications.  She self taught herself HTML in 2000 and started making websites as a hobby.  Now she maintains several websites, including that of actor/artist, Sonny Strait.  In 2003, she made a video, documenting her experiences at Project A-kon, the oldest anime convention in North America.  In 2008, she assisted with the audio during a live broadcast of local politician debates.  Most recently, she made videos for the Lancaster Police Athletic League and audio syncing for an OU-L news program and for an animation sequence.

Angela accomplished various achievements that she accredits to helping her accomplish her goals in life.  She was on her university’s Dean’s List several times.  She is an amateur artist and won awards at OU-L’s annual student art show.  She is actively involved in martial arts and holds a brown belt in Shuri-ryu karate.  Angela is also an amateur boxer and took first place at the Arnold Sports Festival in 2010.  Through martial arts training, Angela learned to apply her knowledge in all aspects of her life